Skylight’s new deploy tracking feature allows you to zero in on performance improvements or regressions caused by a deployment. Now, each of your deployments will be marked on the Response Timeline, allowing you to answer the following questions:

Did this deployment make my app any faster? 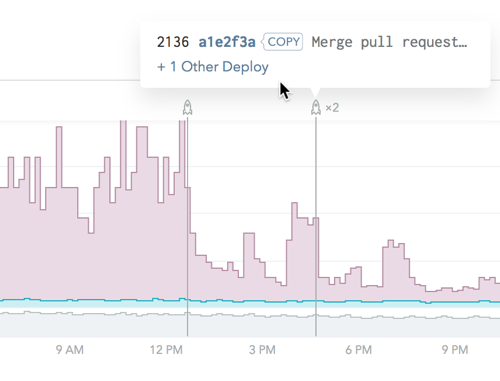 Which changes caused this new slowdown in my app?

Spot app slowdowns in the endpoints page response timeline and correlate them with specific deploys. If your app is linked to GitHub, click the git sha to be taken to the commit associated with that deploy.

With deploy tracking configured, each of your deployments will be marked on the Response Timeline. Hover over the deploy icon to see information about that deploy. Depending on your configuration, you will see the deploy id, the git sha of the commit you deployed, and a deploy description.

Multiple deploys in a short timespan will be combined into one icon, with the deploy count indicated next to the icon. You can click on the deploy info popover to see a modal with deploy info for all deploys in that timespan. As you zoom in, these collapsed deploys will expand.

The deploy rockets are rendered with d3. One challenge was ensuring that rendering the deploy markers (using information from our Rails app) doesn't block the rendering of the latency data (from our Java collector) while still synchronizing the animation of the two. We ended up with a three-step render process. Here's what happens behind the scenes when we render new deploy markers in the gif below:

Linking Your Deploys to GitHub (optional)

Linking your app to GitHub allows us to provide additional context to your deploys in the Skylight UI, such as the commit message from GitHub and a link to the relevant commit. While we don't require linking to GitHub to configure deploy tracking, we do recommend doing so to get the full benefit of the feature.

The challenge of linking deploys to GitHub commits is that just because a deploy has a git sha assigned to it does not mean that the sha is guaranteed to be on GitHub. Thus, we can't just automagically link you to your GitHub commit; it might be a 404. Instead, we need to check that the commit exists on GitHub before generating the link.

In order to link your deploy information to GitHub, we need the following things to be true:

A Long Time in the Making

Longtime Skylight users might know that deploy tracking is a feature we’ve been wanting to provide for a while. Due to the small size of our team, we had to prioritize other features, and deploy tracking moved to the back burner. It’s great to see this feature finally come to fruition. Deploy tracking will help you navigate your performance issues even more easily, in line with Skylight’s goal of providing Answers, Not Data.

Haven't tried out Skylight yet? Sign up for your 30-day free trial! Or refer a friend and you both get $50 in credit.